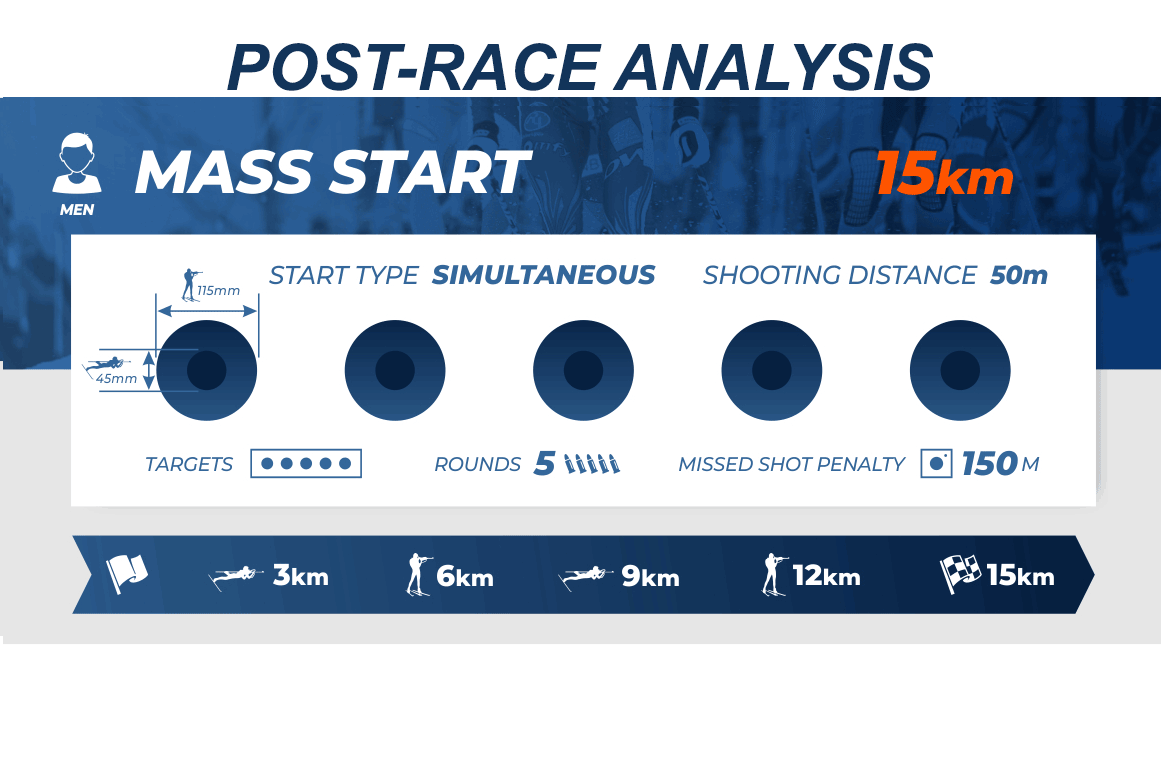 In perfect conditions, Germany’s Arnd Peiffer hit all and outfought Martin Ponsiluoma on the last lap for his eleventh win on the highest level. He has one Olympic gold, two World Championship golds and eight World Cup victories. This was his first ever mass start victory in at the top level.

Peiffer did not ski particularly fast with the tenth best course time of the day, neither did he shoot particularly fast, he only recorded the 14th fastest range time of the day. He was however very accurate on the range hitting 20 of 20. The only other athlete to do this was the home favourite Simon Eder, how finished eleventh. In a tactically astute race we did not see Peiffer lead at any point before he passed the runner up Martin Ponsiluoma in a bend on the last downhill, only some 20-25 seconds before he crossed the finish line.

Entering the home straight the Swede was unable to challenge for the win and Arnd Peiffer could celebrate the first German win, since Benedikt Doll’s victory December 19 2019.

Our biathlon model was shocked by the victor as it only gave Arnd Peiffer a 1.38 percent chance of winning.

He hit ten of ten in the standing and had the eighth best range time of the day and fourth best course time.

The Swede left the range after the last shooting just ahead of the winner and only three seconds ahead Emilien Jacquelin. Ponsiluoma led almost the entire last lap. He pulled hard to ensure that none of the pursuers would be able to close the gap. It must have been a massive disappointment to realize that Peiffer passed him on the inside in the second last curve of the race. Even so this is the best finish position of Martin Ponsiluoma’s career. Our model only gave him a nine to ten percent chance of making the podium before the start of the race, so even if he is disappointed with the last half minute of the race, he has good reasons to be happy with the overall result.

Tarjei Boe finished third less than ten seconds behind the winner. He hit 19 of 20, missing once on the first standing shooting. He was fifth when leaving the range the last time, but caught up with Jacquelin and Doll on the last uphill and easily outsprinted Doll after Jacquelin fell on the last downhill.

Benedikt Doll was only 22nd after missing once during the first shooting. He did very well hitting his next 15 shots. He was less than six seconds behind the leader when leaving the shooting range for the last time, but even as he chased hard he was unable to catch up.

Emilien Jacquelin was the best of the mighty French team finishing fifth. He had the 3rd best range time of the day and the seventh best course time. He was in a group together with Doll and Tarjei Boe only a couple of 100 meters from the finish, but fell on the last downhill. Considering how good a sprinter he is, it seems somewhat likely that this fall cost him the last podium place.

Sturla Holm Lagreid was very much in contention for a hat-trick as he was leading when coming into for the final shooting. Having won both the sprint and the pursuit earlier in the week. However, he missed once and finished sixth just ahead of leader of the overall World Cup, Johannes Thingnes Boe on the last lap.

Boe had the best course time of the day, but was not able to finish better than seventh after having three standing shots.

Sebastian Samuelsson missed two prone shots and even if he hit ten out of ten standing and skied fast having the third best skiing time of the day he was unable place better than eighth.

Quentin Fillon Maillet spent much of the race in close proximity to Sebastian Samuelsson as both of them missed two prone and hit all standing. Quentin had the second best range time of the day but only the twelfth best course time.

Simon Eder was spectacular on the shooting range. He hit 20 of 20 and had the best range time of the day. However his skiing speed let him down and he finished eleventh.

Anders Fjeld Andersen did well hitting 19 of 20 and finishing in twelfth place. 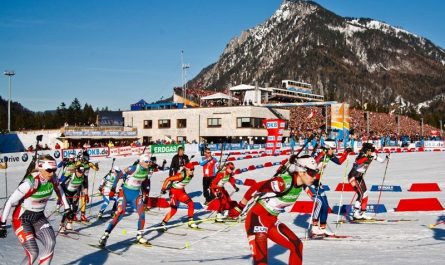