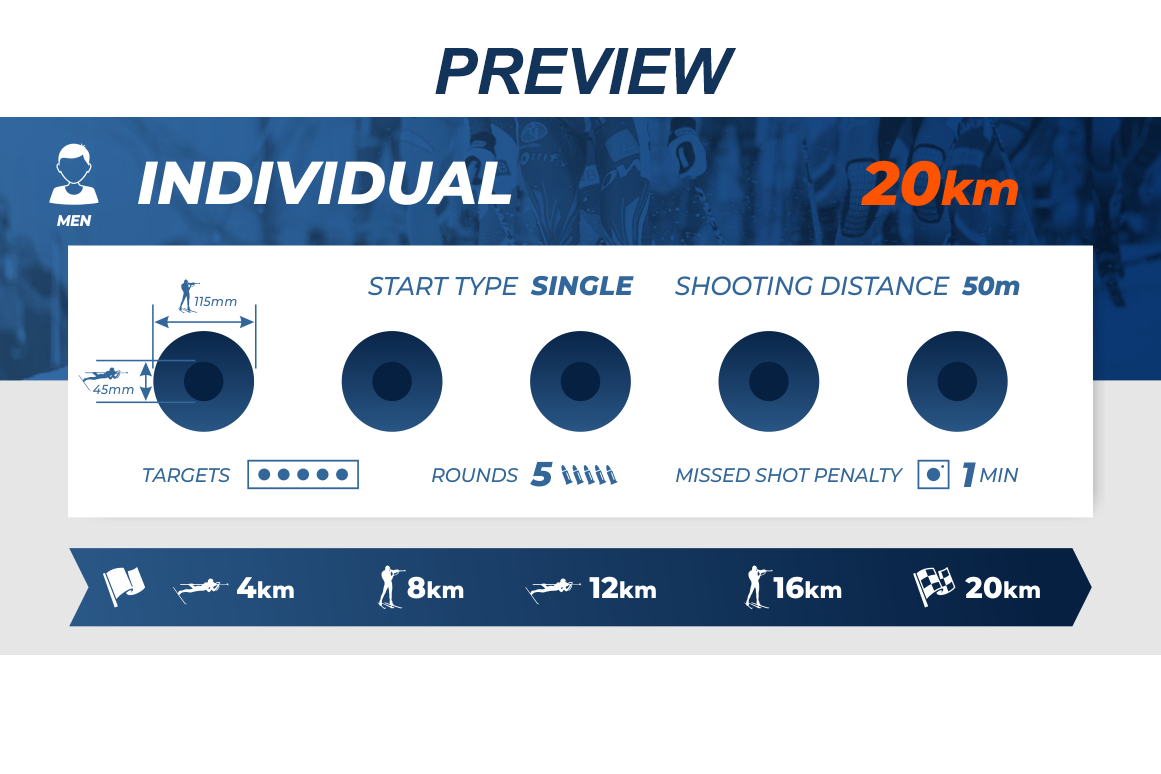 Below you can see Sportindepth’s biathlon model prediction for the men’s 20km Individual race of the IBU World Championship 2021 in Pokljuka.

Johannes Thingnes Boe is the main favourite with a 22 percent chance to win the event and he has some 43 percent chance to get a medal. He is the current Winter Olympics champion in the Individual discipline and he won a Silver medal in the last year’s World Championship in Italian, Antholz-Anterselva with a finishing time of a bit less than a minute more than the great Martin Fourcade who retired at the end of the 2019-20 season.

Johannes Thingnes Boe is also a clear favourite to win the 2020-21 overall biathlon world cup in our season simulation with 97 percent winning chance.

Sturla Holm Lægreid is estimated to win the race about ten percent of the time and has about a 30 percent chance to get any medal, according to our model. Also, he is predicted to finish, some six seconds behind Johannes Thingnes Boe.

Sturla Holm Lægreid is the favourite to win the small globe for the individual cup in our 2020-2021 season simulations. He has 75 percent winning chance there, based on our model’s prediction.

Quentin Fillon Maillet has the same winning chance as his opponent from Norway, Sturla Holm Lægreid – ten percent, but his chances of getting any medal is a bit smaller at around 26 percent. Fillon Maillet is predicted to finish about 45 seconds behind Johannes Thingnes Boe.

One more athlete from France – Émilien Jacquelin has a seven percent winning chance of and some twenty percent chance to get a medal.

Johannes Dale, team Norway, seems likely to have a tight race with Émilien Jacquelin, as our model predicts both of them with winning chances of same seven percent and 19-20 percent chance to climb on the podium.

Arnd Peiffer, Winter Olympics champion in Pyeongchang in the sprint discipline, has some three percent winning chance, in Individual race, and eleven percent chance to get any medal.

Another German – Benedikt Doll, is predicted to win the race some three percent of the time and he has some nine percent chance to end on the podium.

The Swedes, Sebastian Samuelsson and Martin Ponsiluoma have five percent and three percent chance to win the race, according to our simulation model. Chances to win any medal are 16 for Sebastian and 9 for Martin.

Jakov Fak, a Slovenian biathlete, was second best at the 2018 Winter Olympics in the individual race. He was less than six behind the winner Johannes Thingnes Boe. For today’s race, our model predicts him a winning chance of two percent and a seven percent chance to win any medal.

Simon Eder from Austria has about 1 percent to win the race and seven percent to get a medal, based on our simulation model.