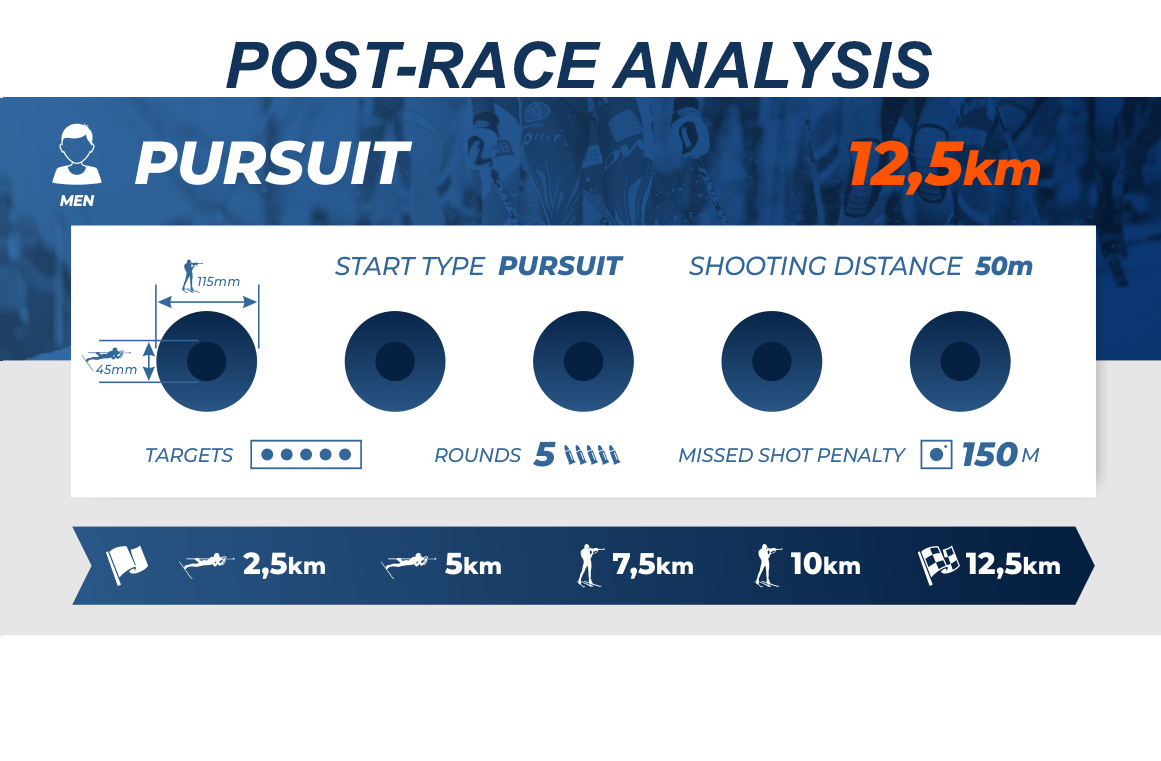 Quentin Fillon Maillet started the pursuit in second place 17 seconds behind the leader Johannes Dale. After the first prone shooting Fillon Maillet had taken the lead which he would not forfeit at any point thereafter. Even as Emilien Jacquelin shot quickly and flawless and skied fast to put Fillon Maillet under maximum pressure, he would not crack.

Both the French athletes hit 20 of 20 and produced the fifth (Jacquelin) and 14th (Fillon Maillet) fastest shooting times of the day. Really it was a French masterclass of shooting. Antonin Guigonnat also hit all of his targets to finish 9th. Fabian Claude missed three, but did still finish in fifth. Providing the French team not only with a double win, but also three among the top five and four among the top ten. A most impressive race by the French team indeed.

Fabien Claude will wear the red jersey as he now leads the pursuit world cup. He was in second place in the pursuit in Kontiolahti.

The other biathlon superpower on the men’s side, Norway tried hard to put up a fight. The Norwegian team also had four of their runners inside the top ten. With their two Johanneses, Dale in third and Thingnes Boe in fourth, following the French to the finish line. Sturla Holm Laegreid was sixth and Tarjei Boe finished in seventh. Vetle Sjaastad Christiansen was twelfth even if it seems he ran a bit out of gas on the last lap, as he lost more than half a minute to the fastest from the last shooting to the finish.

Johannes Dale followed up his first win with another top three finish. He was third behind Fillon Maillet and Jacquelin after only missing two shots.

The press conference with the athletes who made the podium has been uploaded to Youtube by the IBU and is available below.

The leader of the overall world cup, Johannes Thingnes Boe, was fourth for the second day in a row. He missed three targets, but had the fastest skiing time of the day and remains our biathlon model’s clear favourite to defend his overall title.

A worry for the Norwegians is that Erlend Bjoentegaard was a non-starter and is reported to struggle a bit with back issues.

Simon Eder in eighth was the best non-French and non-Norwegian finisher. He only missed a single target and had the second fastest shooting time of the day.

Sebastian Samuelsson finished in tenth. He missed two targets and had the 15th best skiing time of the day almost 40 seconds behind Johannes Thingnes Boe.

Martin Ponsiluoma dropped three places from 15th to 18th as he missed five targets, even so he yet again skied very fast as he had the third best skiing time of the day.

The Italian Lukas Hofer was the athlete to leap up the most places as he climbed from 50th to 17th during the race.

Highlights of the race can be seen below.