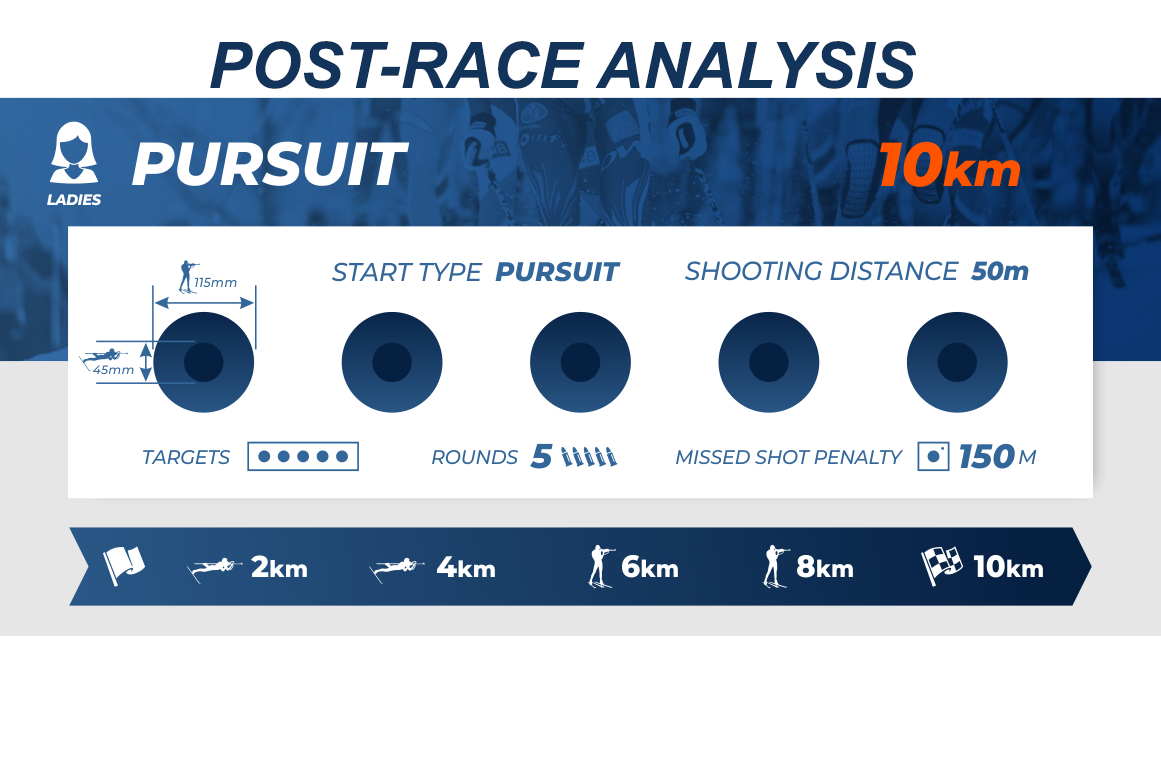 Tiril Eckhoff, who won the pursuit world cup last year, returned to her best after a difficult start to the current season. The main driver behind her win was her impeccable shooting, hitting all the 20 targets. Together with very good skiing speed this was enough to move up the ranks and leave the shooting range after the fourth and final shooting well clear of her rivals.

Norway took the top to places on the podium as Marte Olsbu Roeiseland finished in second place. With the winner of the sprint, Hanna Oeberg, in third.

Roeiseland missed just two targets and was able to move up two places from fourth to second. The model saw Olsbu Roeiseland with almost a 50-50 chance of making the podium.

Hanna Oeberg skied substantially slower than she had in the first few races of the season. Obviously starting with the lead tends to make you ski slower as the other athletes have the advantage of chasing the leader, but the differences in skiing speed was still surprisingly large. She missed three targets, but skied more than a minute slower than the fastest athlete of the day, Hanna Sola. Eckhoff was some 40 seconds faster than Hanna Oeberg and little sister Elvira was about half a minute faster than Hanna. In our opinion Hanna Oeberg mostly lost this race on the tracks as she produced only the 28th fastest skiing time of the day.

Even if this race can be seen as a slight setback for Oeberg, she remains the favourite to win the overall BMW IBU Biathlon World Cup.

Below is the interview with the biathletes who made it to the podium.

Belarussian Dzinara Alimbekava continued her impressive start to the season. She finished fourth today and has been inside the top ten in every singles race so far this season. She is now among our model’s favourite to win the under-25 cup. This is a huge surprise which it was near impossible to see before the season started.

Julia Simon was the biathlete to move up the most places. She did a great race after some disappointing races and advanced 39 places during the race. She moved up from 56th to 17th.

Johanna Skottheim hit 20 of 20 and improved 15 places to finish in fifth. Lisa Vittozzi continued her erratic season start, dropping from 21st to 42nd.

As usual the IBU have made some highlights of the race available on youtube.